Salento is the name of a 100 km long and 40 km wide peninsula in the extreme southeast of Italy and is often referred to as the “heel” of the Italian “boot” because of its shape. Administratively, the peninsula belongs to the Puglia region and includes the province of Lecce and parts of the provinces of Taranto and Brindisi. The area is sometimes called Terra d’Otranto, as a result of the importance of Otranto in ancient times. Older names for the peninsula are Iapygia, likewise Messapia and Sallentina.
The most important cities of Salento are Lecce, Brindisi, Gallipoli, Otranto, furthermore Maglie, Galatina and Nardò.

Dolmens and also menhirs from prehistoric times are preserved as remains of the early peasant culture. However in ancient times the Salento region was inhabited by the Messapians, an Illyrian tribe that had to defend its independence in wars against the Greek settlement of Taras (Taranto). Herodotus reports of an equally important war around 474 B.C. between Taras and the Lega Peuceta (an alliance from the Bari area), supported by the Lega Messapica (from Salento). In this conflict, after several years of war, the Messapians were still able to gain the upper hand, however from about 280 B.C. the Roman Republic gained dominance over the whole of southern Italy.

The Italian dialect spoken in Salento is completely different from the dialects spoken in the rest of Puglia. Rather, with its open vowels it resembles the Sicilian idiom.
There are also some Greek language islands that probably originated through a medieval migration or even through ancient Greek immigration. The “Grecia Salentina” includes villages like Corigliano, Cutrofiano, Melpignano, Castrignano dei Greci, and also Martano, Calimera and others.
Salento also differs from the rest of Puglia in its architecture. Traditional houses are built in the Greek style, i.e. they are often whitewashed and have a flat roof.
The historical town centres, on the other hand, are mainly built in baroque style, with some typical Salento details such as the exuberant painting of the facades of palazzi and churches. One of the most popular building material was the pietra leccese, a rock with a warm reddish-yellow colour, but also the yellow carparo.
However in the rest of Puglia, the typical historical architectural style is predominantly Romanesque, in contrast to Salento. 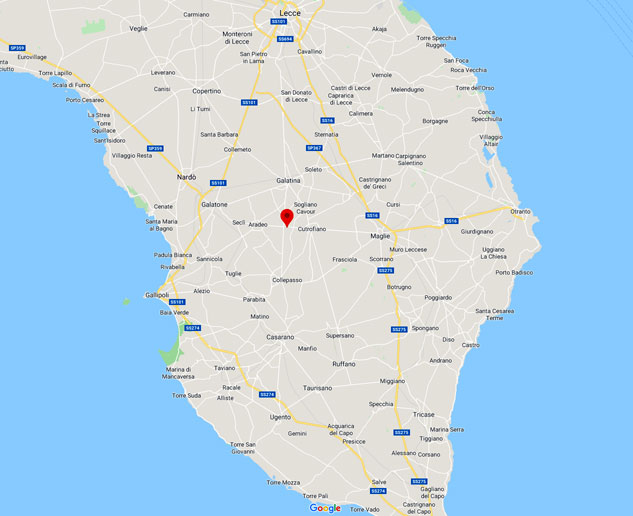 Click on the map to see a more detailed view 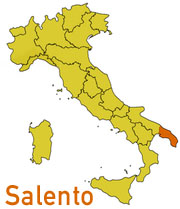 Region: Apulia
Province: Lecce (LE)
Height: 49 m over sea level
surface area: 238 km²
Population: 96,000 (2011), 53% of whom are women
Population density: 400 inhabitants/km²
Demonym: Leccesi
Patron saints: Sant’Oronzo, San Giusto and San Fortunato
Lecce (from Latin: Lupiae) is a city in Puglia and the capital of the province of Lecce on the Salento peninsula.
In the surroundings of Lecce a relatively soft tuff is mined, which made possible the rapid spread of the Salento Baroque, whose numerous buildings can be admired in the city centre. Because of the barocco leccese characteristic of the city, it has also been called the “Florence of the Rococo” or “Florence of the South”. One of the most famous examples of Lecce’s baroque style is the façade of the Basilica of Santa Croce

The foundation dates back to 1211 B.C. and is attributed to Malemnius, son of Dasumnus and first king of the Salentines. Legend has it that after the destruction of Troy, the city was occupied by Lictius Idomeneus, who also gave it its name and opened it to Greek culture. The origin of the city of Lecce is shrouded in darkness. Even less is known about the period from the 4th to the 11th century. It was a time of battles, plundering and exploitation; one of the darkest of the Middle Ages. But the city experienced its heyday in the late Middle Ages.

At that time it belonged to the county of Enghien and slowly awakened to new life after the decline it had suffered after the fall of the Western Roman Empire and in the course of the following years. The lively intellectual life that had always prevailed in the city earned it the name “Athens Apulia”. Although it was not at all closed to the achievements of the modern age, it has retained its original appearance; at first glance it is clear that art has a right of domicile in Lecce

Lecce is very easy to reach with the Italian railway from Milan, Bologna via Rimini and Bari. The nearest airport is in Brindisi, 75 km north of Lecce. Lecce can be reached by car on the well developed and toll-free SS 16 (E 55) from Bari via Brindisi. The city centre is surrounded by a ring of the state road SS 16 with a diameter of 7 km, so that the narrow streets in the inner area are hardly burdened with through traffic.

Today, the Salento peninsula is a partly undiscovered tourist destination, far from mass tourism. In Santa Cesarea Terme the villas and spa palaces in Oriental style give you a feeling of “1001 nights”. In the coastal thermal bath sulphurous healing springs bubble out of grottos. At Cap Santa Maria di Léuca, on the southernmost point of Apulia, there is a pilgrimage site; here stands a pilgrimage monastery in honour of the Virgin Mary. Gallípoli is derived from the Greek “beautiful city” (kale polis). The small town on the west coast of the peninsula is uniquely situated on an island. Otranto is the easternmost port city in Italy and has always been an important bridgehead on the Adriatic Sea. The town is idyllically situated on a rock, bordering wide sandy beaches and pine forests in the north.

The inland is characterized by extensive olive groves which formed real forests and some of them are many centuries up to 2.000 years old. Sadly the plant disease Xilella Fastidiosa, imported from America, has severely affected olive cultivation since 2015. Thousands of centuries-old olive trees have fallen victim to the disease. Great efforts are underway to replace the affected trees with resistant olive varieties or other trees. On the other hand, the soil is very fertile and, due to the climate, a good 3 harvests per year can be harvested from the same field.